This information will give some other point of view before buying LG GOOGLE NEXUS 5X or HUAWEI GOOGLE NEXUS 6P with some bad or good information. Please note we are tell you that these phone are bad, but please consider this information for give more reference about it. When Google release the new upgrade of Android version, known as Android Marshmallow or Android version 6, then it comes together with new Android smartphone product, but this is the first time for Google to release two smartphone together when new Android operating system release, Google have partnership with LG and Huawei to make Google brand smartphone which call by NEXUS.

The Specifications of LG NEXUS 5X

The Specifications of HUAWEI NEXUS 6P 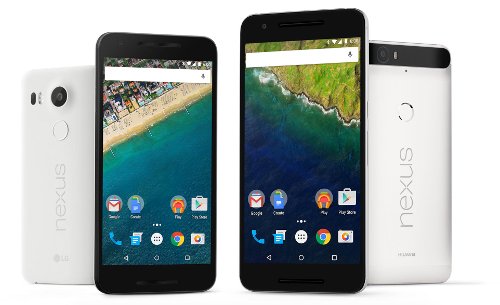 What is Strength and Weakness for LG NEXUS 5X Body & LCD & Processor ?

The disadvantage of LG NEXUS 5X body is produce from plastic but the design is good and does not looks like cheap smartphone, however non metal body make LG NEXUS 5X weight become lighter to hold with one hand.  We can find power button and volume button at right side of the body and easy to hold when we use this phone.

The LCD resolutions is full HD at 1080 x 1920 pixels, we can play any fullHD movie without problems while using LG NEXUS 5X, Playing 3D HD Games also can run without lag because it have dedicate Graphic Processor Unit using Adreno 418.

The good thing about LG NEXUS 5X processor is using hexa-core Snapdragon 808 processor, this will run with double processor with Quad-core 1.44 GHz Cortex-A53 for heavy duty work and the second processor is dual-core 1.82 GHz Cortex-A57 for use at light applications, this combination or CPU can make LG NEXUS 5X battery become more stronger, because the low power processor will work for light work.

What is Strength and Weakness for HUAWEI NEXUS 6P Body & LCD & Processor ?

The advantage of HUWAEI NEXUS 6P body is combination between plastic and metal. At back cover, near main camera, the body shape is more thicker then other shape, but you will use to this shape after use for several month. This phone have dial speaker in the front body, one in the bellow near mic and the other one near the ear-peace. When we see the movie or playing games at landscape mode, then we have left and right speaker when we see at LCD screen.

The LCD advantage at HUWAEI NEXUS 6P is using AMOLED, it give more bright and colorful view when see pictures or movie or playing games. The size of HUAWEI NEXUS 6P LCD screen is 5.7 inches, with 2560 x 1440 resolutions. For HEAWEI NEXUS 6P user who does not like the factory default color view can change the color setup to developer menu at setting, by default the developer menu will hide, we have to hit several time at menu Setting > About phone > build number until Developer menu appear, it will show notification that we have already as developer.

Start from LG NEXUS 5X & HUWAEI NEXUS 6P, we will find Imprint menu at Setting. This menu use for activate and detect our fingerprint at Nexus fingerprint sensor. For several test, when using Imprint for register our fingerprint is more faster and easy to use, just press several time of our finger for register in memory, then it will saved and ready to use at LG NEXUS 5X & HUWAEI NEXUS 6P sensor. The strength location of NEXUS fingerprint at back side body bellow main camera is good idea, because with just simple tap or our finger hand then our lock screen will open directly.

The drawback of latest Nexus family phone: LG NEXUS 5X & HUWAEI NEXUS 6P is still lag of external memory microSD slot, actually for some reasons using lowest 16 GB internal memory at LG NEXUS 5X is already big enough to install several interesting applications from Google Play Store, but we have to know, if we install many big Hd games, it will download many data files and need more storage, maybe using 32 GB internal storage is recommended for longer use, but at HUAWEI NEXUS 6P, we can buy 64 GB or 128 GB internal memory options.

We are very welcome for anyone who can give more information or disadvantage to share for us, please feel free to share your opinion.