Let see the bad and good things about NOKIA X NORMANDY from different point of view. As we know at several year ago, Nokia start to choose which one is the best for their next operating system. At that time Nokia name already famous as the biggest Symbian phone selling in the world. At that time they are aware that Symbian can not compete with Apple and Android because Android getting bigger at the year 2011. But as we know Nokia at the end choose Microsoft Windows Phone for their default operating system and together along with that choose, the Stock price of Nokia in the market has been become getting lower. Yes, most of people in the market willing Nokia to choose Android at that time.

Please note, we are not going to said that Nokia X family is bad, we just want to give more neutral point of view for user who want to buy this smartphone, in fact Nokia they-self said that The Nokia X family is starter or entry level smartphone with standard specifications. But anyway, the first thing that the standard user will not get Google Play Store as their native applications library to download many kind of apps, but thanks to Nokia, because they give the substitute to their own Nokia Android library to download although the applications is not as many as native Google Play Store. 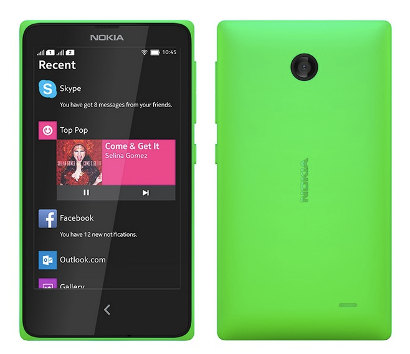 Android is open source, and Nokia can use Android with their own modifications. This is also happen at Nokia X and X+ and XL Android operating system, they modified the OS that become Microsoft feel, the display and also Microsoft the factory default applications also available like Microsoft Skype and Microsoft Cloud OneDrive (previously known as SkyDrive).

Yes, using Android without Google Play Store and without some native Google applications like Google Map, Gmail and something like that will make the user feel uncomfortable, and this is one of the drawback from Nokia X family, but do not worry, if you want, you can download Google Play Store and other Google applications at Nokia X family, but of course at this time, you need to download the offline APK files first and install manually at Nokia X or X+ or XL smartphone, there are some tutorial how to install Google Play Store, Google Map, Gmail and etc at Nokia X or X+ or XL. Do it easily or you can ask some expert to help.

The Disadvantage of Nokia X or Nokia X+ or XL specifications

The drawback of Nokia X & Nokia X+ family camera, they only give 3.15MP without LED flash, but maybe this is for cut the price matter, the Nokia X and Nokai X+ can sell with lower price. The camera get more improvement at Nokia XL with 5 megapixel and also with LED Flash, however the Nokia XL price is more expensive the Nokia X and Nokia X+.

The drawback of Nokia X is low 512 MB RAM, although we know Android can walk without problem with 256RAM, but the 512MB RAM still limited to install more multitasking applications. The memory RAM improve at Nokia X+ and Nokia XL using 758MB RAM.

Regardless of any disadvantage, there are also some advantage for Nokia X family. Many people still happy to use Nokia brand, because Nokia has already famous to produce high quality smartphone and consistence design, this matter will make Nokia fans happy with Android at Nokia, and the best or the good news that Nokia X family sell with low price, hopefully anyone can use it for daily smartphone. So, the choice is yours.